Last weekend we had our first barbecue of the new 'season': 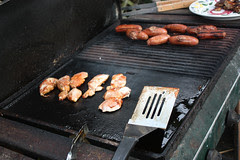 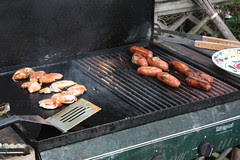 It may not look very promising, but we had 2 flavours of chicken, sausages, salmon, kumara, and lamb chops. A fine repast!
And then this weekend, I enjoyed mowing the lawns surrounded by some vibrant colours. 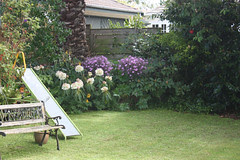 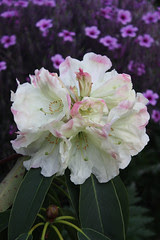 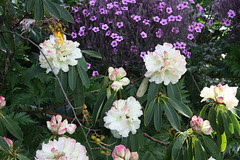 The yellow of the last of the kowhai, the pink & white of the rhododendron, the last red of one of the camelias, the bright green of new growth, and the purple of a plant who's name always eludes me.
Posted by themulliganz at 2:00 PM No comments:

We've just had a few days away, & I had the weekends either side of those days, so it felt like a holiday.

Sunday was the Final of the Rugby World Cup.

And Monday was a holiday. The kids came around for dinner, and although it was bit blustery, we decided to have the first Barbecue of the summer.

Roll on the warm days!

Posted by themulliganz at 3:10 PM No comments:

One of the all-time greats

While travelling back from Taranaki recently, we listened to two LPs by Dr Feelgood - Sneakin' Suspicion and Down By The Jetty.

I tried to explain to Jayne why the guitarist, Wilko Johnson, was so good, and failed at doing so. So I figured the best solution was to show you one of the tracks which best captures his playing style - Roxette:

Their respective Wikipedia entries are HERE and HERE.

And there are a whole lot more clips on YouTube.
Posted by themulliganz at 3:19 PM No comments:

You would think they would know better by now!

I mean, how can someone claim to be "disappointed that @PPTAWeb are so afraid of backing up their assertions over School Choice that they refuse to debate @Steve_Whttngton"

That is one of the spurious tricks used repeatedly by the Right in their puerile efforts to discredit those who disagree with them. This assertion is made with no evidence that PPTA is "afraid of backing up their assertions". Why should they be "afraid"? Of what, for heavens sake?

Ask yourself this: why should PPTA give a fringe player in a fringe party on the ranters' right of NZ politics a platform to air his half-baked ideas?

As PPTA says: Their views are already in the public domain and well-known.

ACT's views are likewise already well-known, and have been consistently rejected by 90-95% of the electorate in every election since 1987. However, ACT candidates are either slow-learners (they still haven't got the message after 7 elections) or are so divorced from reality and messianic they want to impose their views on everyone else.

I say: good on PPTA. Polls tell us almost no-one* else is listening to ACT, so focus your efforts on the slash-and-burn Tory/Tolley government.