I must admit I'd forgotten how attractive the road from Waipawa to Hastings can be, as we usually travel over Highway 50 - it's more eficient, not as busy, and slightly quicker, but not as attractive, as you drive alongside a small river, on which there are now 'wetland recovery project.
But that took us into Havelock North, from which we had to find our hotel. We did. It was as impressive as the website advertised.
Originally built by the the founder of the Tomoana Freezing Works in Hastings in 1885, it was later used owned the Sunderland family, who kept horses in the 50 acres surrounding the homestead. In 1946, Sir James Wattie purchased the homestead with its land to grow fruit and vegetables for his thriving cannery business.
Since 2005 it has been run as a boutique hotel, owned by a Japanese businessman.
Check-in was surprisingly informal, and the staff were discreet - in the sense of not being intrusive or ever-present.
Desiree had scored a 'deal' on one of the suites - the Seefeld, which was lovely and unexpectedly luxurious!
Seefeld is a town in Austria; the suite is decorated in Hand-painted Folk-Art style furniture in turquoise & peach colours. The other suites and rooms in the Homestead are Verona (Italy - Furnishings in blue and yellow), Andorra (in the eastern Pyrenees between Spain and France - Gold and green furnishings), and Macon (France - Louis XV style furniture with Red and Gold brocade furnishing).
Our bathroom alone was as large as the 'lounge' area of the place we'd stayed the night before! And the bed was a canopied four-poster 'super-king size'! Desiree was very amused by the sheer size of the bed.

Did I mention the grounds yet? No? Well, the house is masked somewhat from the gate and road by an enormous horse-chestnut tree, We parked the car under it, and it was regularly coated in the blossoms which covered the tree. The grounds are of three sorts - an orchard, a (small) golf course, and gardens.
So, once we had unloaded the bags, we decided to explore.
There is lots of wisteria, even growing up one of the Yew trees behind the house!

We were surprised by noises in the undergrowth, and tracked down the source - rabbits are a plague, and the staff regularly mount shooting expeditions to control their numbers. We did wonder, when told this, what was on the menu that evening!
Fortunately it was lamb not rabbit.

Behind the house is a pool, gymnasium, (lawn) tennis court, and barbecue area, including one odd structure, presumably as a heater rather than for cooking?
Another feature of the grounds are the number of statues placed throughout. They are an odd mix of the traditional and Asian.
More of these later.
The surrounding grounds are of course a working farm, so there is livestock to be encountered as well, although we didn't discover if they were used to supply the house or not.
The house has some lovely touches - the balcony looks through an umbrella tree which was in full bloom.
There is a lovely dresser in the upstairs hallway with ornate decoration:

Our bed and the writing desk were also decorated but less ornately.

And the staff would visit our room while we were out, to turn down the bed, for example, or to leave the weather forecast for the next day!
As ever, there were things which struck me as odd or amusing. The hand soap in the bathroom was 'Hand Made', but the packet also listed the 'Antidote', which did give me pause!
So that was the hotel! Friday we spent wandering about the village (Desioree was checking the shops!) and having brunch in a cafe, visiting a few wineries, a 'cidery' (actually for the beer), and a cheese boutique. Needless to say there was a little tasting indulged in as well. We visited Elephant Hill, Clearview, out at Te Awanga, the Te Mata Cheese Factory and Cafe, and The Cidery in Awatoto Road in Meanee.
Friday evening we took a few refreshments and visited the Williams in Taradale, for takeaways and a catch-up. We even made it home more or less sober, and without drowning in what was becoming near-torrential rainfall, as another front and associated rainbelt crossed the country.
Posted by themulliganz at 3:51 PM No comments: 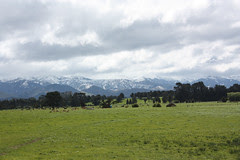 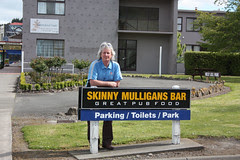 Posted by themulliganz at 11:44 PM No comments:

We were out of town for a few days, and, wouldn't you know it, we were away for Sarah's birthday. She says that's now becoming a new tradition - we've apparently managed it 2 years in a row.
Anyway, that left Jayne to keep up the 'family traditions'. She did as well, fetching out a collection of photos of wee Sarah over the years, so they need sharing:

Posted by themulliganz at 12:45 AM No comments: