I don't talk about work online.

But, having said that, there are sometimes when you're taken aback at work. And today that happened to me.

It happened like this: I have been re-assigned to a new position and placed into a newly-formed team. That means I am leaving the Comms team of which I have been a member for a number of years now. It also means I am shifting office - only one floor, but leaving a small and close-knit team.

So today, the office sprang a surprise "farewell" afternoon tea and presented me with a simply lovely gift and card, with heartfelt comments. 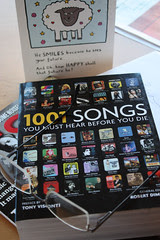 It is humbling to be made aware like this that one actually occupies a special place in a team, and are appreciated by owns colleagues.

Posted by themulliganz at 12:40 AM No comments:

I have been getting Uncut regularly now for some years. But recently, the kids bought me a postal subscription, and the first edition has just arrived. 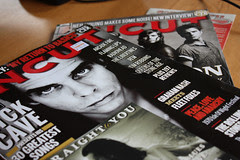 The interesting thing is that just a couple of days earlier I collected my copy of the September edition, while the posted edition is for November, already!

Posted by themulliganz at 10:04 PM No comments:

A Tui in the Tree

New Zealand is a land of birds - or at least it used to be!

It has no large native mammals. Instead it was blessed with a rich and diverse bird-life. Maori depradations had an impact - with the extinction of Moa, and habitat changes in a few places - but no permanent damage.

The arrival of European settlers, however, had a profound impact. Not only were new domesticated animals introduced (cows and sheep especially), but so too were new pests (rabbits, stoats, possums, rats). Combined with extensive bush clearance to create arable and pastoral farmland, the scale of bird-life in New Zealand was much reduced.

Recently, however, the efforts of the Department of Conservation and projects such as Zealandia Karori Sanctuary have seen something of a revival of the fortunes of many species.

And we are one of the benficiaries. We have a native kowhai tree in the backyard, the flowers of which are one of the favourite sources of food for the native Tui. So each Spring we have Tui visit to cavort, feed, and warble in the bakyard - delightful! 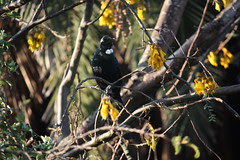 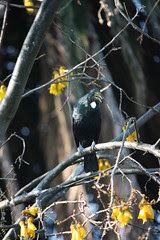 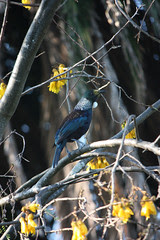 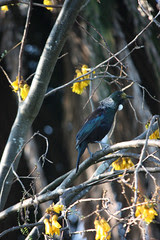 Or a couple of other similar clips also on YouTube are HERE and HERE.

Posted by themulliganz at 8:50 PM No comments:

Who are we listening to?

Posted by themulliganz at 4:24 PM No comments: