Whose bed is it anyway?

This morning was cold. Charlotte had promised to call early, so Desiree had got up to talk to her.
Unfortunately, Charlotte needed to go to bed, rather than talk to her mother. So Desiree went back to bed.
Where she was joined by our ever present footpad - Goldie.
She's so important she even has her own web-page. 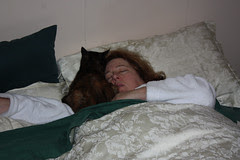 Posted by themulliganz at 11:46 PM No comments:

I happened to stop and look at fridge the other day. Not, you understand because our fridge is particularly unusual or different or even inherently interesting.
In fact it's probably more accurate to say I looked at what covers our Fridge. Whoever invented fridge magnets has a lot to answer for.
Some of what obscures our fridge is surreal, some helpful, some purely decorative, some strident propaganda, and some creative. Some I have no idea about. 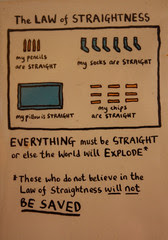 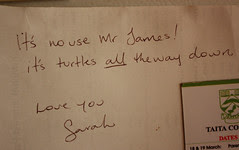 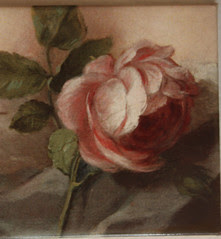 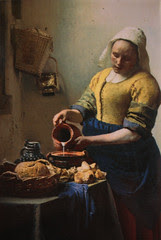 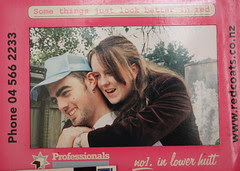 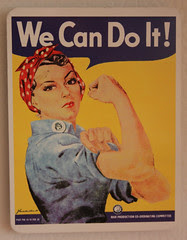 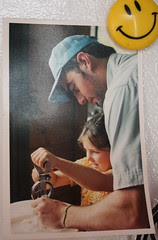 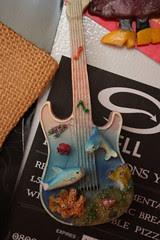 What season is it anyhow?

It is mid-June at present - well past Autumn, but a long way from Spring. But somehow our garden doesn't seem to be able to tell the difference.
We have 2 flowering cherry trees. One at the end of garden and the other beside the deck. This latter tree is being trained to grow over the deck and provide some shade.
Interestingly, the one at the end of the garden lost its leaves quite some weeks ago. The one beside the deck is only now losing it's leaves, and littering the deck in doing so. 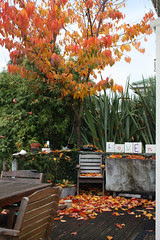 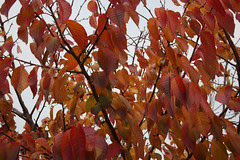 However, at the other end of the garden, the other tree already has a couple of very small blossom flowers! 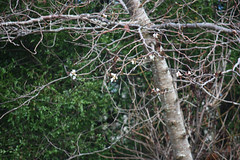 Posted by themulliganz at 10:28 PM No comments:

The DominionPost was dominated by two large spreads on Saturday. They both featured imprisonment, but from opposite sides.
The first was the cover story and concerned the verdict from the David Bain murder trial - a long-running saga. That verdict saw Bain found Not Guilty, and, as the DomPost screamed, 'Free at Last'. After all, it is 15 years since he was originally found Guilty and imprisoned. 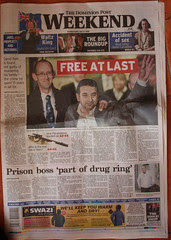 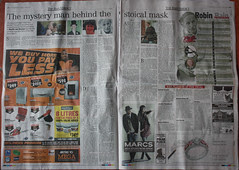 As an aside, David is my 2nd cousin once removed. His place in my family tree can be seen in our Family History website.
The second was a photo story about the round up or muster of wild horses in the Kaimanawa Ranges, and their imprisonment and, for some, eventual execution. 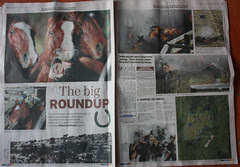 I'm still not sure if this was mere coincidence or a deliberate arrangement. If it was deliberate, I'm not sure what the purpose was. But I was struck by the serendipitous juxtaposition of two stories dealing with imprisonment.
Posted by themulliganz at 7:00 PM No comments: