It's a lovely day

After a string of wet, dreary, days, the sun came out yesterday, and I was able to get the lawns mowed.
That was followed by a clear, frosty, night, which left it's trace on cobwebs in the garden. 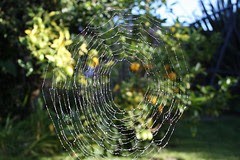 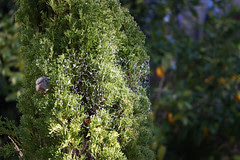 But it was so nice we even gave the bird an airing outside. 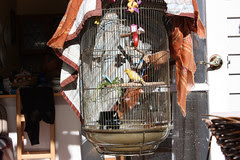 Posted by themulliganz at 5:00 PM No comments: 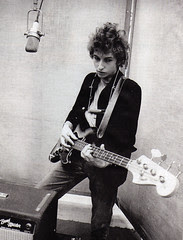 Posted by themulliganz at 5:55 PM No comments:

...that on our way back from Collingwood to Takaka we detoured to look at the Pupu Springs, which claim to have the purest/cleanest & therefore clearest fresh water in the world.
And it is startlingly clear! 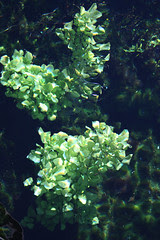 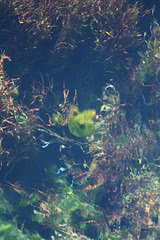 And ... there were a few other photos, of the Springs amongst other places, which got missed out of the other gallery, so they are in Nelson Gallery #2.

Posted by themulliganz at 5:41 PM No comments:

Nelson in the Sun

In late April Desiree & I took a few days out and spent them in Nelson. By taking the four days after Easter as Leave, I had a 10-day break from work. Desiree was in the second week of the school holidays - it worked out well all round!

So, the idea was to fly to Nelson and just potter about there for a couple of days, then make our leisurely way over the Takaka Hill and find somewhere to stay over there.

We were booked into a Bed-and-Breakfast place on the edge of town & I hoped within walking distance of the CBD, although it proved a little further out than I'd hoped. The accommodation was a little too 'New Agey' for my liking, but, what the ...?

We only just made touchdown in Nelson, as the area was blanketed with a band of fog. As luck would have it, a gap opened at the right time to allow our plane in! It also made the scenic route the cab-driver used into town something of a mystery tour.

Nelson, huh. What does one do in Nelson? Well, if it's ANZAC Day, as it was when we arrived, not a lot until things open after lunch. We wandered about the Cathedral and then the Provincial Museum. The former was OK, but not as imposing as I remembered; the latter quite good in a simple modern style (more 'stories' than artefacts). 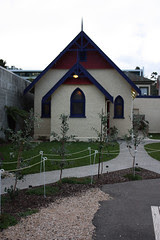 We found a likely place for a drink in interesting surroundings: The Free House, a 'pub' in a converted church which serves locally-brewed 'real ale'. A treat for me, although Desiree has taken to drinking beer recently, and found one she liked. What we hadn't counted on was that it was the monthly 'poetry reading' evening! We stayed for a while, but then succumbed to hunger and went in search of dinner.

We also wandered about Queen's Park Gardens, which were small, compact but very pretty. We had brunch in a cafe beside the Gardens and then into the Suter Gallery, which is surprisingly sizable, and with a number of very good exhibitions - a very pleasant way to spend an hour or so! 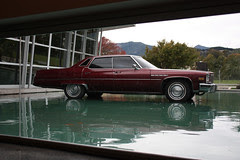 Shop-wandering - no real aim, passed time pleasantly enough. A rental car meant we could go to the World of Wearable Art exhibition which is outside of town. It has, as is to be expected, a display of fascinating creations, although not as many as one might have hoped for. And alongside it is a gallery of classic cars, and some beautiful examples indeed.

We also visited Te Mania Vineyard out near Appleby, and the Höglund Art Glass Studio & Gallery. Restaurants we tried and would recommend: The Boatshed Cafe over-looking Nelson Harbour, and the very pleasant, central city When in Rome Italian restaurant. 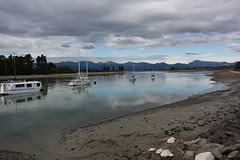 I had decided that we would take the coastal route to Motueka (& save the inland route through Upper Moutere for the return trip). We avoided the 'new' bypass route in favour of the old coastal road through Mapua and Ruby Bay. I was taken by how different the landscape is from when I was there as a teenager - smaller acreages under orchards and 'baches'; a lot more 'lifestyle' blocks and flash houses. We stopped at Mapua, for a wander around the jetty and a couple of shops before settling on a cafe & bar for brunch. And very nice it was too.

Motueka was bigger and much more given to servicing tourist needs than I remembered (from 40 years ago!).

So that meant over the Takaka Hill. When last we did it, we were in a dodgy second-hand Mini, the thermostat in which decided to mis-behave, so the trip up & over was fraught with over-heating problems. No such dramas this time however! I must confess I had completely forgotten just how high the hill is (791 metres) and how spectacular the views can be. Although the day wasn't brilliant, still the vistas are breath-taking, and even more so in the clearer weather we had on the return trip on Friday. 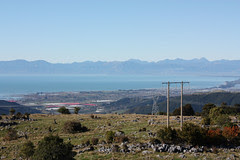 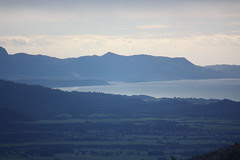 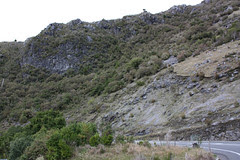 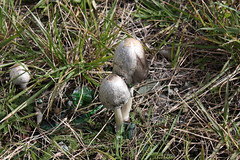 I even saw these very odd little mushrooms, with their silver caps, near the top of the hill! 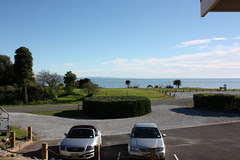 We were keen to stay somewhere close to the sea, so, as Takaka is inland a few kilometres, we headed to Pohara Beach, and found a perfectly ordinary but satisfactory motel. That meant we had ample time to go back to Takaka and wander their small collection of shops. There is a heavy presence of artists in the region, and the tourist-orientated shops smack of aging hippies and New-Agers, but a refreshing change from Westfield Malls! 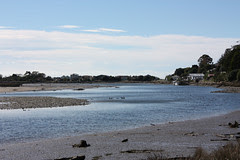 If Takaka is a 'town' (& that might be stretching things a little), then Collingwood is a village, but appears to have a more interesting history of fluctuating fortunes based around it's port, extractive industries and a series of unfortunate fires. It has two contrasting 'museums', side-by-side: one is a modernist approach utilising text-heavy 'story panels' and almost total absence of artifacts; next door is a separate building made up of two large display cases separated by a central passage. This latter is a collection of memorabilia and artifacts, a collector's passion, one imagines. 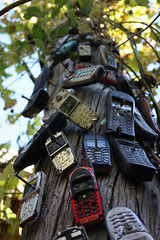 Wandering back to Pohara we paused at a workshop-gallery to ooh and aah at the prices of paintings and pottery, but without buying. We also stopped at the Mussel Inn - a delightful pub in "the middle of nowhere" based on a boutique brewery, which apparently is doing so well they can't meet the demand and so have contracted another brewer in Invercargill to brew to order! 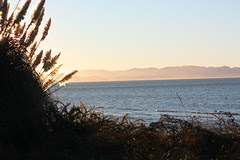 Being seaside, the motel gave us a good view of the Bay, and the sunset, as well as an excuse to walk along the beach. It also attracted others, including one couple who brought their cat with them in their car, and took it for a walk on a leash beside the beach! 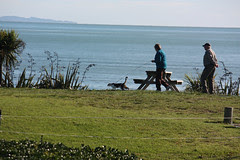 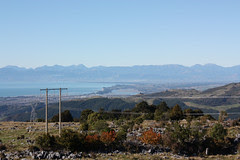 The return trip over the Hill was in glorious sunshine. In Motueka we turned off the main route to go through Upper Moutere. 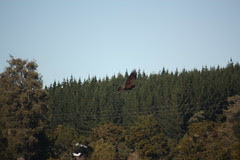 I also saw this hawk beside the road, which haughtily looked us down, and then lazily took off to circle for prey. 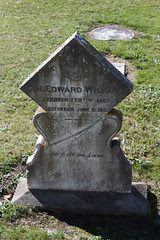 We stopped at the village of Upper Moutere which was originally called Sarau by the original German settlers. Desiree finally succumbed to the crafts and bought a lovely small ornamental platter.

That left us with plenty of time to luxuriate in the warmth and sunshine over brunch, so we called at Waimea Estate for lunch in vineyard before heading for the airport and home - rested and refreshed. 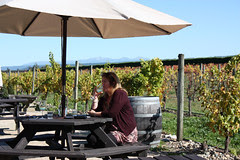 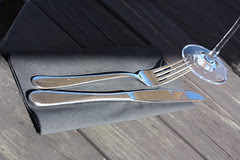 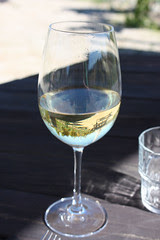 Oh - I nearly forgot! There is a GALLERY of larger versions of the pictures above and the others from the trip HERE.

Posted by themulliganz at 6:55 PM No comments:

Not for long, but heavily! 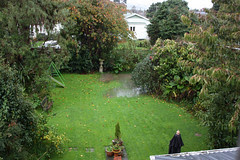 Our backyard is testimony to that. 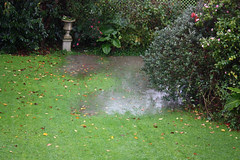 Posted by themulliganz at 5:05 PM No comments:

Posted by themulliganz at 1:35 AM No comments: