I have often reported on the visits of birds - kingfishers, tuis - to our backyard which have delighted me.

But recently it has been the turn of other animals to come calling.

I got home from work one day to discover a dragonfly inside the house and trying to get out. Needless to say I took photos and THEN released it! 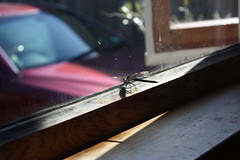 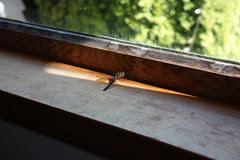 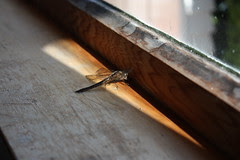 And then yesterday, while mowing the lawn I had to work around a monarch butterfly who had decided it need a rest on the back lawn. I tried picking it up and putting it on some leaves on a tree, but it seemed to prefer the grass! So I worked around it until it decided it was time to move on. 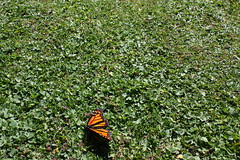 And, finally, later the same day, in the mid-afternoon sun & heat, a curious hedgehog came out to wander around the lawn. It was bewildered by the noise of my camera, took fright and scuttled back into the undergrowth, presumably heading back to bed! 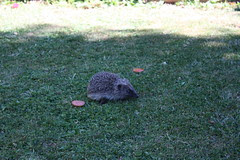 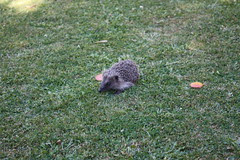 Posted by themulliganz at 3:16 PM No comments:

Four years for a government?

At Waitangi earlier this year John Key suggested a four-year term for a government.

"My view is that there should be a four-year fixed date of Parliament.

Actually, that is 2 separate issues, casually mixed together.

Firstly, a "fixed date".  difficult to know just what he's on about.  If he means that the election will be at a specific date, that is likely to impose a degree of inflexibility which may be impractical.  More sensible would be to say that the election must be held on a date withing the month of, for example, November.  More flexible, but still definitive enough to be binding.

The second issue is the length of the parliamentary term - 4 years in his suggestion.  I appreciate that New Zealand is unusual in having such a short term for the entire Parliament and government; for example, in the US, only part of the House of Representatives is elected every 2 years.

I have 2 objections to the suggestion of a 4-year term.  Firstly, I am conscious that there have been in the past, and almost certainly will be in future circumstances in which a government feels compelled to seek confirmation of it's right to govern.  The most recent instance was Muldoon's decision to call an election in 1984, which his government lost.

The reverse of the same coin is when a government loses the support of MPs (it's own or others) and so cannot command majority support to govern.

In both instances a government may need to call an election well before the end its term.  Being locked into a fixed four-year term would cause very considerable difficulties.

More fundamentally, in my view is the role of the 3-year term plays as a substitute constitutional safeguard.

The Executive in New Zealand has very considerable power and authority to act, even contrary to the wishes of a large portion of the public.  There is no Upper House to keep a check on excesses; the judiciary is narrowly constrained; and the Governor General has, at best, an advisory role only.  Forcing a government to call an election within a maximum of 3 years from it's own election allows for citizens to vent their anger if they feel they have been betrayed by the government.  Certainly that was the fate of the fourth Labour Government, after the damage wrought by Roger Douglas and the rest of his right-wing brigade in the 1980s.

I would hate to see the ability to exercise this power watered down.

Finally, as an aside, the story about this article on Stuff claims "the constitutional landscape was again the topic of discussion at Waitangi". But one wonders about the significance of Key's suggestion, and to whom it was made. Because a reading of the speech he delivered makes absolutely no mention of the 4-term year issue. Hmmm. So what's going on? Kite-flying, anyone?

Posted by themulliganz at 3:36 PM No comments: