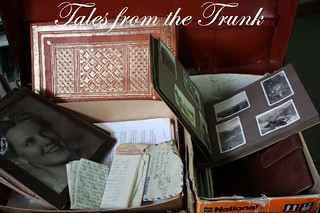 A Mulligan headstone in Gisborne

Mulligans and Hutchins, and in Gisborne? But we came from Southland!

So what's the "story" here?

Francis Humphrys (that's correct - no 'e') was the eldest son of James Mulligan and Agnes Simpson. James was the first of our family in NZ, along with his sister Margaret. Agnes Simpson was Scottish, from Edinburgh. James died in 1901 and his wife Agnes in 1904, both at their family home in Alexandra Street, Caversham. By that time Francis & AW (the two eldest) were ready to move their 'family' - their siblings - to Invercargill. This they did, bar one sister who was sent to their mother's family in Auckland, and one younger brother who was sent cousins elsewhere in Otago. 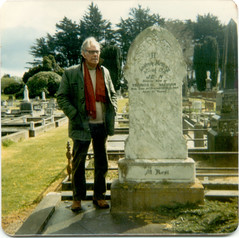 The elder brothers gained employment, which, in Francis' case involved becoming a storeman. He also married Jean (Jeannie) Forrester (of a Scottish family). Francis moved with his wife to a new job at an ironmongers in Winton. In 1912 Jeannie gave birth to a son Francis Forrester. To avoid confusion the younger Francis became known as Billy within the family (his friends always called the adult Billy 'Frank'). Their daughter Moira (known as Molly) was born in 1914. Unfortunately, Jean contracted plupeural fever and died just a couple of months after Moira was born. That left Francis Humphrys a widower, with two young children to care for.

The short-term solution was to bring his youngest sister, Essie, to live with them, so she could care for the house and young children. She was barely in her teens, so this must have been a daunting role for her.

We can follow their subsequent movements through their entries in the Electoral Rolls.

1919 was a busy year for Francis Humphrys. He moved back to Dunedin, living for a time at the YMCA in Moray Place. He also married a second wife, called Mary McGregor Taylor Keast, known as 'Tossie' and by the end of that year the new family was living at 48 Moreau St, St Kilda, back in Dunedin.

By the late 1920s the family had re-located to Oamaru, as the Electoral Roll for 1928 lists him as resident in Meadowbank, and gives his occupation as "traveller". Mary was listed as living in Fir St; probably Francis' actual address as well.

There young Billy attended Waitaki Boys, and a young daughter was born to Francis and 'Tossie', christened Clare Agnes. Family story has it that Clare Street in Oamaru was named after this third child, but is also possible she was named after the street in which the family was living!

By 1935 the family were resident in the "Waitaki Hydro", where Francis was a "timekeeper". By this time young Billy had left school and gone to work, selling shoes from a car to workers on the Waitaki Power projects, which were in full swing - quite likely a continuation of the sort of work his father had earlier been engaged in. 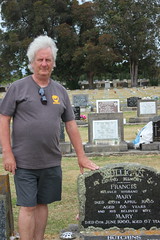 But Francis wasn't finished yet. He accepted a position as storeman for a government agency (probably that which became the Ministry of Works?) which required re-locating to Gisborne. So Francis, Mary, and young Clare moved to Gisborne, living at 111 Ormond Rd, Bartletts, by 1938.

Early in WWII, and after Billy had married Iris Murrell, they also spent some time in Gisborne, as did Billy's sister Moira, where her first child was born.

But the exigencies of the war-time economy meant that Francis had to re-locate again. We next find him at "Karapiro Hydro" in the Waikato in 1946. By that time his occupation was cited as "retired". But, he clearly planned to see out his days in Gisborne. Clare had grown up, and met and married Fred(erick) Hutchins and started her own family. They stayed in Gisborne. 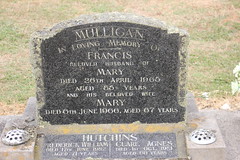 So Francis and Mary moved back to Gisborne; by 1949 they were living at 35 Oak Street, and there they stayed.

I don't believe Billy's relationship with his father and stepmother was a close one, and may indeed have been a tense one. 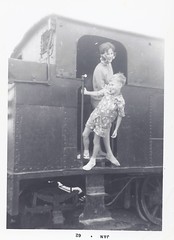 I don't recall Francis ('grandad') visiting us, but I do recall visiting him and Mary. The first occasion was with my parents and sister; the second was when my sister and I went to Gisborne by railcar and stayed with them. I can also remember Dad driving to Gisborne for his father's funeral in 1965.

From that point we had little contact with the Hutchins family, although I suspect both of my parents kept in occasional contact. Indeed some years later, one of the family rented a flat attached to our family home in Khandallah.

It is also possible Billy's somewhat distant relationship with his father, and his view of his mother, stepmother, and their treatment of Essie, was part of what eventually triggered a mental breakdown that took some time to recover from.
Posted by TheMulliganz at 3:17 AM No comments: