One of New Zealand's prettiest birds is the Piwakawaka or Fantail (or again). It's distinctive tail-feather shape is what gives it it's name (in case you hadn't spotted that already!)
We get them visiting the backyard occasionally, and they appear quite tame and untroubled by humans. Actually, they are hunting, as they eat bugs and insects which are often disturbed by humans as they scuff undergrowth or leaf litter.
Recently a visiting piwakawaka was searching for food around our bamboo grove and the flowering cherry beside the deck. Peaches saw what was happened, and, in a burst of feline enthusiasm decided that catching and playing with said piwakawaka would be good fun.


So she launched herself at the erstwhile visitor when it landed on the deck fence and was looking into the flaxbush. 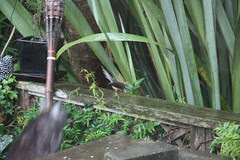 Stopping in time to alight on the (relatively) narrow fence is usually not a problem for Peaches, who is quite agile and sure-footed (in a feline sort of way). But not this time!

In fact she was so focussed on the fantail, she almost flew right over the fence into the midst of the flax! She managed, at the last minute, to hook her hind legs over the top and prevent what would have been an embarrassing mishap. 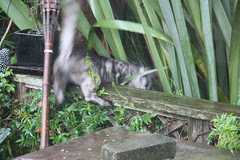 And what happened to piwakawaka? It escaped Peaches' eager clutches, and then flew about squawking in indignation at the culprit. 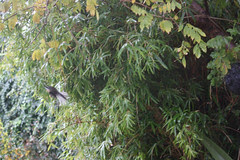 Indeed, it had the audacity to perch in the flowering cherry and on the light-string and give Peaches a right-old dressing down! 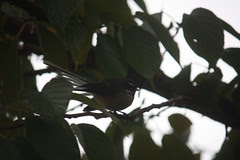 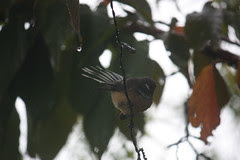 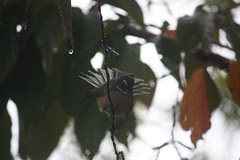 Peaches was suitably abashed at being humiliated by a mere slip of a bird, especially as Jayne and I had observed the entire escapade. 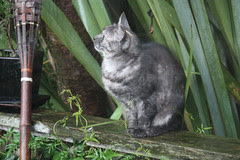 Posted by themulliganz at 6:27 PM