A Sojourn in Napier

In early January, as Part 1 of a 2-Part holiday, we spent a week in Napier. 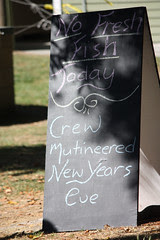 We stayed in the not very flash NZR Welfare Trust holiday accommodation serviceable but aging.
Sunday morning Desiree was keen to spend at the Farmer's Market in Hastings. So we did just that. And there saw this good example why simple signs are best and safest! Aaaargh: verbs and nouns confused. Stick to what you know!.
As there were, initially, just Desiree and I, we pleased ourselves about what we did and when. The major pass-time seemed to be an early morning walk (well, about 0900 IS early when you're on holiday!) along the Marine Parade.
Temperatures were mild, the days were sunny, and we took our time about things. We ended up visiting Clifton one afternoon, and had coffee in the cafe overlooking the beach and sea. I was intrigued by these clusters of 'sticks' off-shore. I can only assume they mark either some aqua-culture enterprise, or are fishing stands mounted in an off-shore reef.
We had lunch one day at the swanky Craggy Range winery, sitting outside in the sunshine in the picturesque Tukituki Valley, east of Havelock North.
We also spent a very pleasant evening catching up with Trish and Martyn - longtime friends and once-upon-a-time neighbours. It being Napier, we of course had a barbecue, which gave Marty the chance to show off his very new, very expensive, very shiny barbecue.
It has to be said however, that while the food was well cooked on the new appliance, most interest was sparked by their new anti-fly device! (Think of a fluorescent green child's plastic tennis racquet and you're about there!
And then late in the week, we were invaded by off-spring and attachments: Craig and Sarah drove their new car down from Auckland, and Jayne and Jack caught the bus from Ohope, and all for a change of scene!
Needless to say, Desiree had some activities planned for us all, so all I had to was drive.
Wineries seemed to dominate (funny that!) - first up Elephant Hill with it's striking weathered copper (green) cladding, and impressive wooden statue at the apex of the drive.
Then it was just down the road to Clearview Estate, with it's quirky installations in the carpark and herb and spice beds.
We finished the day with coffee at the Clifton Bay Cafe - Jayne & Jack amused themselves with "children's activity sheets", to the amusement of Sarah and Craig, while I pondered ... whatever was able to grab my attention!

Posted by themulliganz at 1:02 PM