I wonder if Goldie could have played for the Phoenix?

We have three cats. One of the older cats is called Goldie.
All the cats have different personalities. Goldie is the nosy and sociable one. Whenever visitors arrive, one of the cats will disappear, one will ignore them, but Goldie will come and investigate and say hello. She may even adopt one of them as a cushion or seat if they stay in one place for a while.
She is also inclined to appear whenever we have dinner, and likes to help with the cooking. Sometimes, when no-one is watching, she will succeed in sampling our food. 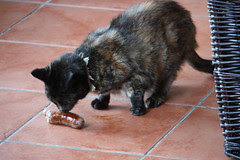 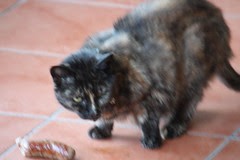 And when we're in the backyard, relaxing, with guests, or pottering about doing things, she is sure to appear and will probably get involved if she can.
So, last weekend, we had had a canopy up to provide shade in the backyard. When it was time to take it down, Goldie came to help - of course! She nosily investigated the box with the poles, and wanted to sit under the canopy when it was on the ground. 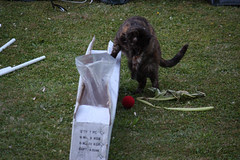 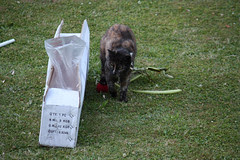 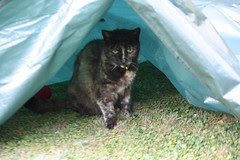 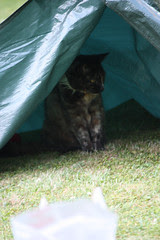 There happened to be a small ball lying about the yard as well, so, being a clever footballer, she seized the opportunity to combine football with burrowing - chasing, kicking, falling over, and following all being integral to how Goldie plays football. 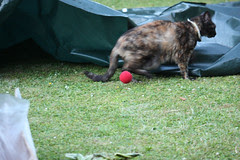 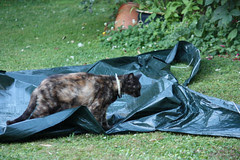 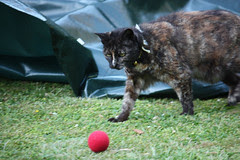 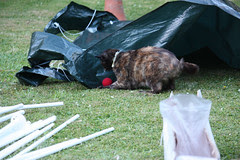 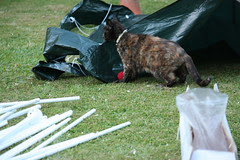 And when the ball got lost, or she got a little tired, she sneakily resorted to her time-honoured trick of falling onto the canopy and wrestling with it. 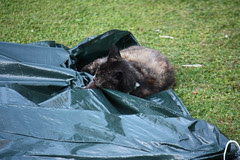 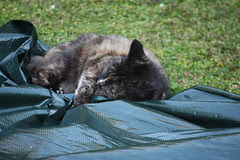 Posted by themulliganz at 11:20 PM